The Song Dominion was formed in 29 A.E. by an alliance of the Decheerans, the Nusriza, the Amaians, and the Ry'nari to oppose the forces of the Ishvana during the Bushraki War - the first invasion by the Ishvana in 40,000 years, since the War of Extinction that saw the end of the reign of the Elder Races.

They chose the planet Song - long a shining jewel of multi-species cooperation - as the capital of their budding Dominion. Rich with life and abundant with natural resources, it had been settled and built up more than a thousand years prior.

They immediately hired the Free Fleet, led by an aging but still-brilliant Mezer Juul, with Maddox Khan and Akari Lane as his seconds. Alongside that formidable force, they built a combined fleet jointly supplied by the formerly individual militaries of the involved races.

Together, they pushed back the Bushraki and Vendal forces of the Ishvana, until a desperate all-out assault destroyed Mezer Juul's command ship, throwing the Song forces into command paralysis until Maddox and Akari took control and saved the day.

Destruction of the Planet Song

The capital world was absolutely devastated in an attack by the Bushraki, leaving it a toxic, radioactive wasteland. Its shining towers and verdant fields were reduced to irradiated slag, and the planet's population, which had numbered in the billion, was now less than 10 million strong, and living aboard refugee fleets.

Possibly even more tragically, as all now know, Tamiko Lane Khan took this opportunity to use a cast-off Celestine Ascendancy cruiser, broadcasting Ascendancy transponder codes, to blow up a portion of the refugee fleet fleeing the planet, triggering the beginning of the vicious hostilities between the Dominion and the Ascendancy that have expressed themselves in the Empire Wars.

The races of the Song Dominion examined many planets to relocate their capital to, but ultimately rejected any replacement. Instead, they would rebuild on Song itself. The critics of this seemingly pointless decision were loud and self-righteous in their attacks. It would cost too much. Too many lives would inevitably be lost to accidents leading to environmental exposure.

In the end, the complaints were swept aside, and the decision to rebuild on Song was framed as a moral imperative. The Ishvana would not be permitted to drive them off their chosen capital. It would not get the privilege of such power over them without utterly destroying them first.

And so began one of the most unique engineering projects and one of the most defiant displays of pure stubbornness Starmourn has ever seen - the construction of Song City. 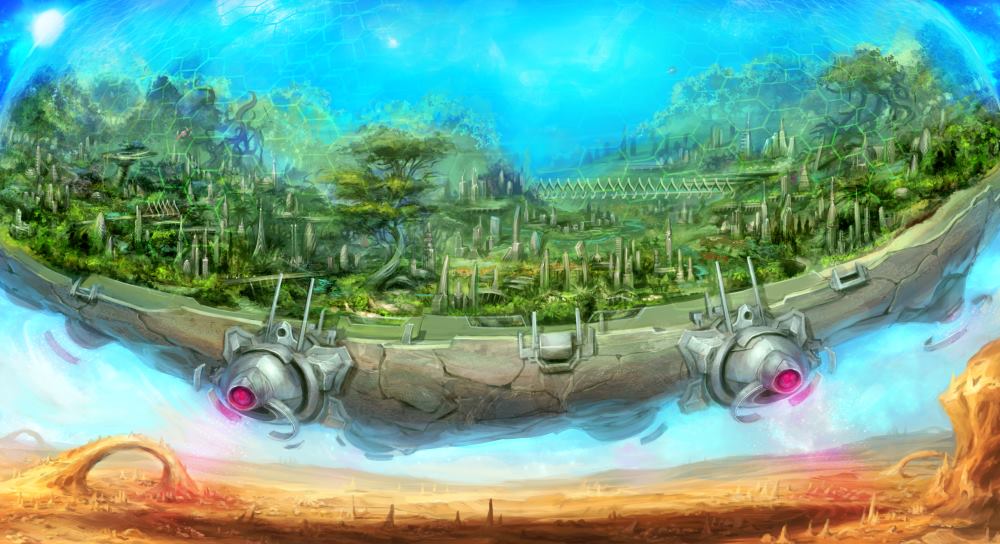 Song City is a huge, craggy, green, self-sustaining island in the sky, constructed that way in order to distance it from the radiation-laden ground. It's covered in huge, shining metallic spires and is lush with plant life of all kinds, in distinct contrast to the world below.

The 'island' was created with a Decheeran landmass generation technology, who developed it using their knowledge of solar energy and nanotech. This landmass (which the Decheeran's call 'sunloft') is strong, porous, and scientifically lighter than air, resembling dark green cork. Sunloft is biodegradable when exposed to water, which is great for food production, though it requires constant upkeep and an influx of raw biomatter to replenish the substance of the island.

Many of the residential buildings in the city are crafted primarily from wood, another influence of the Decheerans. Massive hovertech engines (developed by the Amaiians and the Ry'nari) keep the city in the air and stable, while force fields, controlled electrostatic discharge, and atmospheric manipulators keep the air clean and the wind quiet. Tech is in use everywhere, but wealthier residents prize discrete tech that doesn't make itself glaringly obvious.

Despite the serene, minimalist facade of the city, its inhabitants are painfully aware of what caused the wasteland below, which even eight centuries later remains mostly uninhabitable. As such, the Song Dominion is capable of fielding a ruthless military force when it needs to, under the command of its Lord Commander, and it has large clusters of military satellites in orbit around the planet, placed there to house their combined army and protect the capital from any incursions. Great gun emplacements are concealed beneath the spongy mass of the city itself, which could turn the whole thing into an island-sized, laser-shooting battleship in the sky. 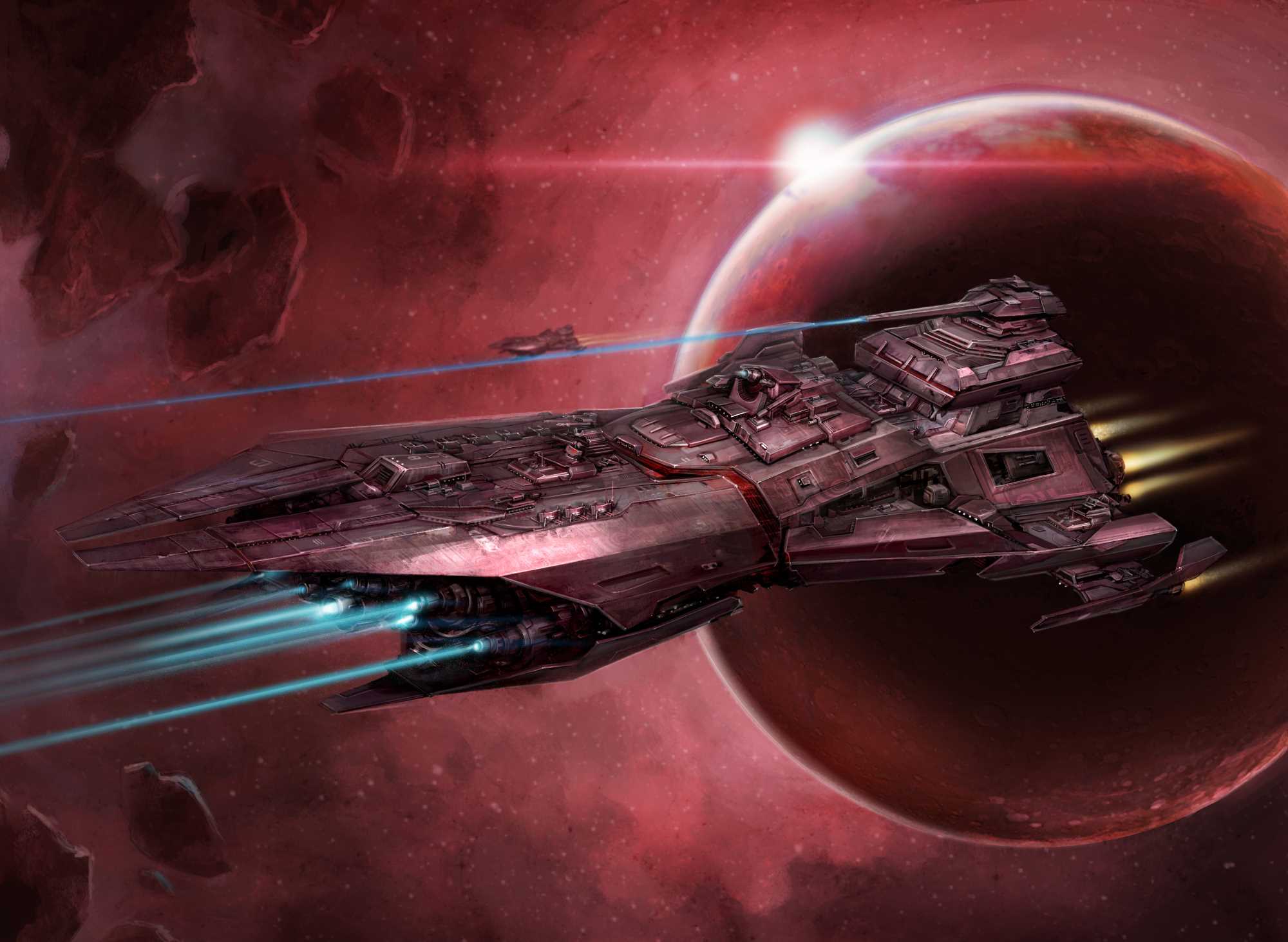 At the end of the 40-year Empire War, the economy of the Song Dominion, like the Celestine Ascendancy, was ruined. Famine swept through parts of the Dominion, and in order keep order, their battered military asserted control and supplanted the formerly-civilian and heavily-corrupt government in what is officially known as the Restoration.

The military leadership, led by what was then called the Grand Admiral - an Amaian man named Adyos Endatia - effected a bloodless coup, displacing and exiling the civilian leadership with the support of a large portion of the populace.

Adyos had been a hero in the Empire War and was easily the most-admired person in the Dominion at the time. The people had enough of the grasping, petty nature of politicians and were glad to see a strong leader who would do what he had to to protect and elevate the Song Dominion.

In joining the role of the military and the government, a new, supreme position in the Song Dominion was created: the Lord Commander.

Of course, not everyone supported Adyos's rise, and for the good of the Dominion, those who felt the need to carry on about their dissatisfaction, especially in public, were soon silenced or left the Dominion, for Scatterhome or elsewhere.

Adyos looked at the landscape surrounding himself and saw himself an island in a dark forest filled with predators.

First and foremost, of course, was the Celestine Ascendancy, though they'd been as weakened as the Song were by their protracted struggle, but there were any number of civilizations that might choose to strike, from the Vonikin Krel to the Fatar or Selassians to the ever-lurking threat of the Ishvana and its subject peoples.

He and his advisors believed that they must, immediately, begin to rebuilt the power of the Dominion, and that nearly any sacrifice was acceptable if the end result was achieved. Piracy, or "strategic confiscation" became an unofficial policy and, as the Dominion grew stronger, an official one. Unions were outlawed, as were mass protests. Slavery was legalized, and became the standard punishment for those engaged in open dissent against the office of the Lord Commander, for what better way to signal oneself a traitor than to stand in opposition to the Hero of the Dominion?

Time passed, and eventually Adyos died of natural causes. Who would supplant him as Lord Commander? He had never established a succession plan, preferring to let his lieutenants fight amongst themselves for his patronage. It is here that the root of the Song Dominion's modern form of government took hold.

It was decided that all military officers would have a say in choosing the next Lord Commander, but instead of anything so egalitarian as one-person-one-vote, each officer would, according to their rank, receive a different number of "votes" to cast in what became known as a Challenge. Under this rough system, the next Lord Commander was selected - a female Ry'nari admiral named Henar Kelaka.

As the decades passed, the military's influence spread throughout all of the Song Dominion, until it was no longer possible to reasonably separate where society began, and the military ended. The entire society was armed, and all able-bodied adults were required to serve a two-year stint in the armed forces. Private militias, loyal to the State, were formed to defend the Song, usually composed of small fighter craft with perhaps a corvette or even destroyer anchoring that cell. The Lord Commander, whoever it may be at the time was lionized and was considered not just the peoples' political and military leader, but in many ways a spiritual leader as well, embodying the best of the strength, resilience, and will to power that marks the Song Dominion.

The system of selecting the Lord Commander slowly changed as well, until it arrived at today's system, wherein citizens gain Influence by performing actions that help the Dominion and can then spend that Influence on a Challenge to replace the Lord Commander with a new one. The more useful that citizen is, the more Influence they have, and thus the more say in appointing a new Lord Commander.

That is, however, the only direct say the citizens of the Song have, for the Dominion believes in unity of purpose and unity of mind. Near-total power is exercised by the Lord Commander, at their discretion, though an incompetent or corrupt Lord Commander is likely to find themselves quickly replaced by the powerful amongst the citizenry.

The Lord Commander at the time of Starmourn's opening (921 A.E.) is a female Amaian named Veria Quaeos, who took the position in 908 A.E.

To understand more about the rivarly between the Song Dominion and the Celestine Ascendancy, read Martias and the Angel.