If you've played an Iron Realms MUD before, you likely have an idea about how combat in our other games works. In Starmourn, however, we're changing things up quite a bit. The focus has shifted from forcing players to cope with a myriad of afflictions that all require a different method of curing (which often require the creation of a bunch of client-side scripts/triggers). Instead, we have placed the fun of strategic decision making in the heat of combat back into the player's hands.

As you already know, you have health and were that to run out, you perish. You can read about health and your other stats here. 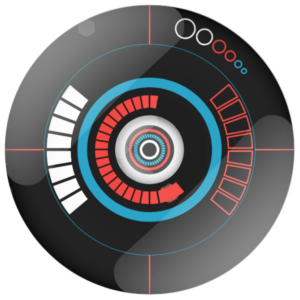 In Starmourn, your health management system is a network of microscopic machinery laced throughout your body. This is called 'wetwiring'. The wetwiring system will generally take care of incoming afflictions and damage, and will heal you automatically. Wetwiring is entirely self-contained and does not need to be tweaked or configured regularly. In fact, the only configuration option you have is to select if you want to prioritise curing health, curing afflictions, or healing your internal systems (more on these below).

When you're fighting in Starmourn, you will receive afflictions as well as damage from your enemy's attacks. These afflictions are designed in a non-debilitating way, offering a short-term inconvenience that won't completely lock you down. Your wetwiring will automatically seek out your ailments, and cure them every few seconds. If this seems a little too basic, keep reading. Afflictions and other attacks will also damage your internal systems. You have 5 of these:

As each of these systems is damaged, you will be hit with new afflictions at certain damage thresholds. These new afflictions are generally more severe, and are only cured when your system is healed back over the threshold where it was given. If your internal system is reduced to 75% health, you'll be given the internal bleeding affliction. This effect will damage you over time for 1.5% of your maximum health every 3 seconds. The only way to rid yourself of this affliction is to mend that system back above 75%, which is done with a manual command: WETWIRING/WW MEND <system>. This command will cure some subsystem damage, and clear the internal bleeding effect (assuming it pushes you back over 75%), while also, importantly, costing balance, making it a tactical decision.

Still seems pretty simple, right? Here's where the strategy comes in: Each time you perform a mending operation on one of your systems, it will gain resistance, lowering the amount of healing that subsequent mending operations will do. You will not want to systematically mend a system any time you take damage, otherwise the resistance will continue to grow until you receive no benefit from a mending attempt. You'll want to evaluate how the current fight is going, and pick when you use your mending operations. In the heat of combat, you will rarely be in perfect health, and a lot of strategy and mastery will come from knowing how much subsystem damage (and related afflictions) you can live with. Over time, the resistance malus will dissipate, assuming that you've given that system a break from your mending attempts.

To add to this, each system has a multi-tiered affliction that will feedback damage into other systems over time. Using the internal system again, if you gain the sepsis affliction, it will feed damage back into your muscular and sensory systems periodically! As these other systems get damaged, they, in turn, start feeding back damage into other systems. If left unchecked, you'll be dead in no time! You'll need to stay on your toes and mend your subsystems strategically, all while fighting for your life.

So those are the basics of Pv* avatar (not starship, of course) combat in Starmourn, which we hope will be a new and exciting system for you to dig into!