Let's talk about starships! We've been very reticent to say much about them so far, because there were some unanswered questions on our end, but we have enough solidified now to talk to you about them.

If you've used the ship system in Achaea, or aetherships in Lusternia, you might think you know what to expect, but you'd certainly be wrong. The only real commonalities between our system and either of theirs is that we decided to treat space as two dimensional. In fact, the biggest influence on the system is the way Eve Online handles starships, though of course everything we do is in 2D rather than 3D. While it is possible to do it in three dimensions, we find that in text, that results in a clumsy and fairly unfriendly interface.

With that out of the way, let's get to the nitty gritty. Here's a little illustration showing the components of a ship. 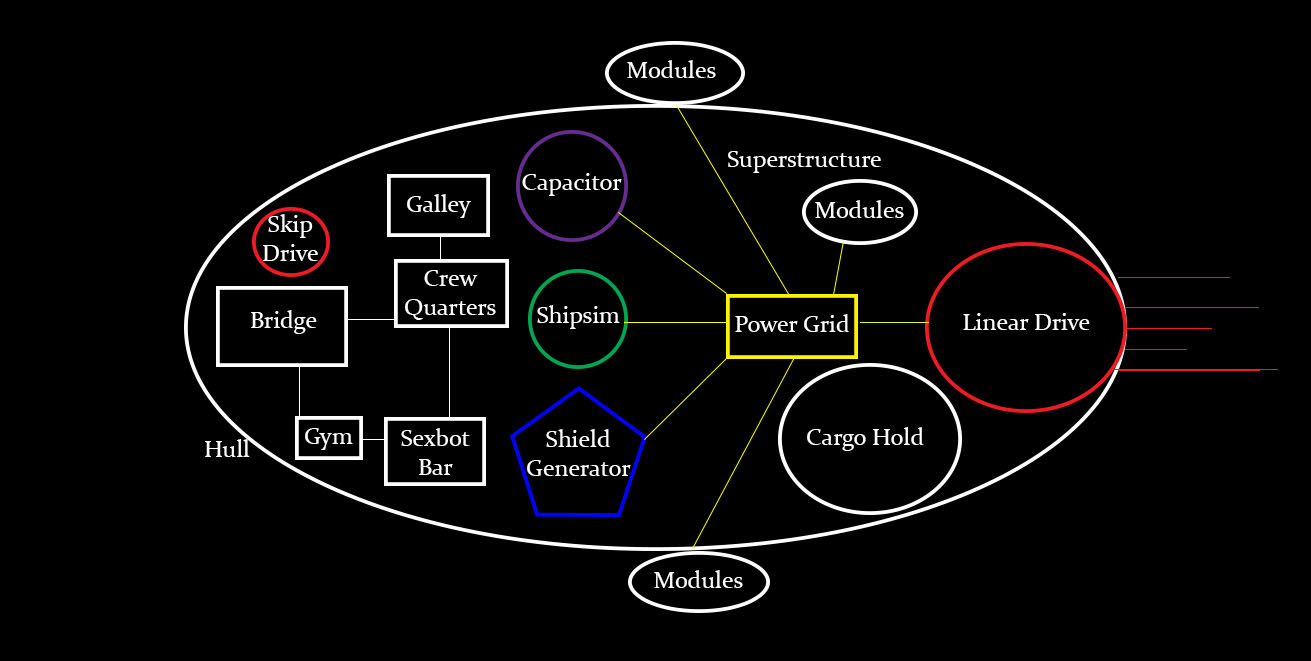 You can think of the superstructure as the base part of the ship.

The linear drive moves a ship forward in a linear fashion, i.e. room by room. There are four kinds of linear drives, each using a different kind of fuel. Although you can get different power ranges for them, each one has tradeoffs.

It's important to note that you can store unlimited fuel for them - it doesn't contribute to tonnage.

Now, aside from linear movement, the other thing that linear drives are crucial for is generating power for your various ship components. Each drive produces X amount of power. That power is, however, siphoned away by various other ship components: the capacitor, the shield generator, the shipsim, and any modules. Whatever power is left over can be used for propulsion. So, there's a balance between ship speed and whatever else you're doing with your ship. If you're firing away with all your weapons while you desperately recharge your capacitor and shields, you're not going to be going too fast!

Linear speed is also affected by the tonnage of your ship. If you've got a large cargo hold and it's full of heavy things, your ship will behave more sluggishly.

Most races, before they joined the larger Galactic civilization, attempt to build ships that will go as fast as possible, up to light speed. Of course, as we know, going faster than light speed is impossible, and even getting matter to light speed requires infinite energy, so isn’t possible. Practically speaking, getting past about 90% of light speed starts to get geometrically expensive, getting worse the closer you approach 100%.

Unfortunately, as all civilizations discover, there is no material that can survive contact with the minute particles of matter that are out there in space when you're going that fast. It will tear apart the hardest known materials. Shielding can withstand the impact, but the problem there is the energy generation required. In order to get a drive powerful enough to push something up towards light speed you need a very large drive, which means a large ship to shield, which means a lot of power generation to survive the constant barrage that will assault it at near light speed. It’s completely impractical basically – beyond prohibitively expensive. You might need something the size of a carrier to transport one individual that way and the energy required to accelerate something that large to near light speed, and protect it, is absolutely immense.

However, there is a solution that is far more efficient anyway: skip drives. Essentially, these take advantage of the fact that wormhole technology lets you skip between two spaces that are very close together very cheaply. These drives create a quick series of one-way wormholes spaced close together that let a ship move forward quickly without actually having a fatal velocity. The ship does have to be moving, as it has to physically pass through a wormhole, but this can happen rapidly at velocities that are very very fast but not so fast relative to space debris that the ship will get destroyed.

To go faster, the ship starts projecting wormholes further out ahead of itself, which gets very pricey. From a mechanics level, this means that space effectively has a built-in “air resistance” to traveling through it…sort of. If you stop generating wormholes you’ll still be moving forward, but at a suddenly much reduced ‘speed’, and the energy required to go faster scales non-linearly.

Visually, what you’d see if you watched a skip-drive capable ship travel is the ship repeatedly splitting into parts and rejoining itself forward of where it was, very very quickly. This allows the ship to effectively travel at faster than light speeds, with more capable skip drives able to generate wormholes further apart.

Skip drives are powered by vandium crystals, with the cost per jump influenced by superstructure size.

Skip drives can also be overloaded to produce Skip Drive Warp Overloads, which are medium-range wormhole 'jumps' that suck charge from your capacitor and which can't be performed in the immediate gravity well of a planetary body or if you're being held back by an interdictor field or tractor beam.

The power grid comes as part of the superstructure, and while it may be upgraded somewhat via modules, it can't be replaced separately from the superstructure. As it determines the maximum amount of power/sec that can be carried from the linear drive to the other ship components, it effectively places a cumulative limit on the types of equipment you can have drawing power. You could still place a huge shield generator on a ship with a small power grid, for instance, but you would rarely be able to allocate enough power to the shield generator to use its full capacity.

The power grid feeds power to the Shield Generator, the Shipsim, the Capacitor, and any Modules that require power.

As ship captain, you're able to decide how to allocate power among these things. If you're taking a lot of damage, you might want to allocate more to shields, for instance, whereas if you're trying to run away, you'll want to turn off as much as possible to give power to the linear drive.

All ships have a shield generator of some sort. Shields have Damage Points they can absorb, and when those Damage Points are worn away by attacks, the shield drops and won't be able to start recharging again for X seconds. It'll then begin recharging, drawing power from the capacitor, until it gets to full.

Shields have resistances to the three kinds of ship damage: Thermal, Kinetic, and Electromagnetic.

Shipsims are extremely powerful, specialized processing arrays. As you might expect, virtually everything on a ship is managed by a shipsim, each of which has a different capacity for computing capacity, measured in 'cycles'.

Along with the superstructure requiring X number of cycles just to keep the lights on, most, but not all, modules on your ship use cycles. If your shipsim doesn't have enough cycles available, you won't be able to activate whatever it is you're trying to activate without turning something else off first.

The ship's capacitor is used when a huge amount of energy delivered in an instant is required. It's slowly charged by your ship's power grid and is used by things like firing a battery of energy weapons or triggering a Skip Drive Warp Overload.

By default, any unused power that flows through a power grid goes to recharge the capacitor.

The sensor suite determines how good your ship is at targeting other things. Your weapons can't fire at an enemy unless and until you've gained a lock on them, which is a function of the quality of your sensor suite vs their ship's size and defensive modules.

The hull wraps the superstructure in a protective coating, and offers protection measured in, like shields, Damage Points. If your Hull runs out of Damage Points, your starship is going to the great shipyard in the sky. So sorry!

Modules are how you customize the functionality of your ship. Weapons systems, defensive mechanisms and various boosts of different types are all modules. Modules come in small, medium, or large, and fit into 'slots' in your superstructure. Most modules will use both shipsim cycles and drive power.

Of course, you'll want to make the ship yours! You can name the ship whatever you like, outfit it with modules, and then set up the interior pretty much how you like.

Each superstructure determines how many rooms, max, there can be in the interior of the ship. Each ship has to have one, and that first room is always the bridge of the ship. Beyond that, you'll have the freedom to allocate and describe rooms as you wish.

However, each room will be of a defined 'type', such as galley, crew quarters, bathroom, whatever. The room titles will always contain those terms, but you'll get one modifier you can add on. So, you could have "Blue Crew Quarters" or "Smoky Cantina". Again though, when it comes to the room descriptions, you'll have complete freedom.

Finally, here's an example of the 'ship info' display in-game from the ship called Tectonic. This isn't a finalized output as there'll be tweaks, but it should give you some idea of what your ship's status screen will look like. 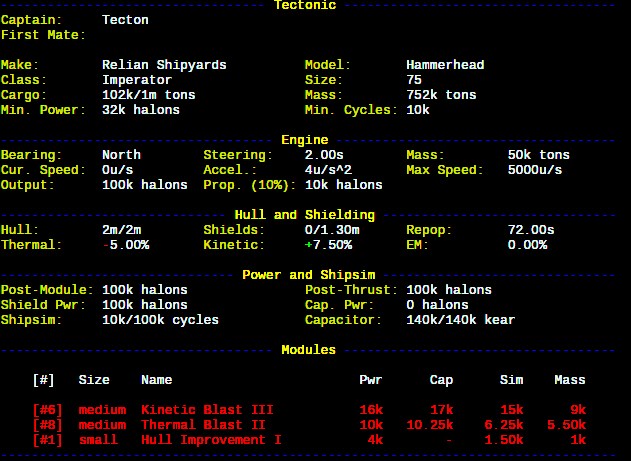