I’m happy to present to you a short interview with Laura Martz, Starmourn’s lead builder for the last 16 months or so. Although almost everyone who works for Iron Realms started out as a player of our games, we reached out to the wider MUD community when hiring a lead builder, and although we had some great candidates apply, Laura got the position and is killing it!

Let’s let her tell you about herself and her building activities in her words: 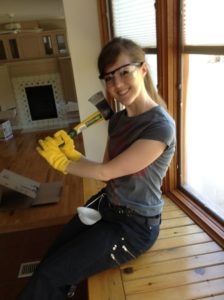 She’s quite the builder, and has taken more than a few heads with that axe.

Matt: So, Laura, tell us about your background in MUDs.

Laura: I first stumbled onto MUDs in 2005, when I logged onto Armageddon. As I’m an avid reader, writer, gamer, and roleplayer it was love at first permanent death. I started staffing and building there not long after I started playing, and did that with semi-regularity until last year, when I was hired by Iron Realms Entertainment.  I adore maneuvering through code challenges mixed with the descriptive nature of a world that relies more on imagination than something as limited as rendered images.  Creating a place that players can enjoy has always been a deeply fulfilling hobby…and now, occupation. I’m really fortunate!  Writing for Iron Realms is really the best job ever.  And, until graphics cards catch up to my awesome brain, I doubt I’ll ever leave text-based gaming as a primary source of entertainment in my life.

Matt: What was your favorite part about building for Armageddon?

Laura: Finding new ways to challenge myself to make areas interesting was (and still is) one of my favorite parts of building. I like making areas feel lush and alive and surprising.  So… secret hideaways, easter eggs, scripts to handle npc behavior, interesting maps. In Armageddon, when I started building, most of the world was well established, and so areas were much smaller and more detailed. My goal was always to evoke an experience for the player, tell a story they’d want to fill in the gaps of – whether that is with a crumbling shanty or a noble’s estate. I’m bringing all of that to Starmourn, and having a great time.

Matt: How are you finding building on Starmourn to be?

Laura: Completely awesome. There’s a lot of amazing features for builders, from custom exits to elevations to instances to hacking to props to datashards to the quest system to progging… the sheer amount of creative tools we have at our disposal to make areas multi-layered and immersive is fantastic. They’re all fun to play with and fit together in different ways.  I love IRE’s graphical mapping system, which was a new experience for me – and I could not live without it, now.

Laura: Honestly? Spreadsheets. I love producing a lot of stuff at once, and I couldn’t do it without google sheets helping me plan out a hundred npcs at once (for example) or a bunch of prop tables for environments.  As for actual inside-the-game building…ugh, really tough to say. The fact that there’s so many different things I like to do keeps me hopping, though.  Once I churn out a bunch of rooms, writing npcs starts to seem really appealing, and when that’s done, I’m all excited about progging, or quests, or some other aspect.

Matt: Can you describe the rough mental process you go through when designing an area?

Laura: I think of it like getting a seed of an idea that I nurture into growth step by step. It might be as simple as a couple of key words (for instance ‘abandoned spacestation’), which I then need to flesh out. I’ll look at images and inspirational artwork, read our extensive wiki, ponder where in space it’s located and what the spacestation’s original purpose was and what it may have looked like when it wasn’t abandoned, ruminate over key locations in the area (a medbay, crew quarters, a charging station for bots), consider what sort of NPCs I’ll need to create (roaming, glitchy, old security bots, motionless laser turrets). I also think a lot about what players will actually be able to do in the area as far as quests and such go.  I’ll jot all this stuff down as notes in a file, work out a map on graph paper (I have a lot of graph paper maps in my house right now!) and when it comes time to actually coding and building things out, the process is really easy and fast.

Matt: What’s your favorite area that you’ve designed and built so far on Starmourn?

Laura: This is the toughest question that there is.  I have built a lot of areas in Starmourn, and I love something about all of them. Benu Wen, the W’hoorn homeworld, has one of my favorite monsters in the game (a three-legged poisonous tripod-like dinosaur called a tridactyl), and I love how the lower gravity makes all the trees spindly and tall.  There’s an area on the surface of the planet Song I designed that is devastated by nuclear destruction and filled with mutants. I love nuclear devastation AND mutants! Oldtown, in Scatterhome, is a creepy, half-flooded labyrinth of ruins deep in the asteroid, filled with roaming Bushraki gangs.  I love ruins, labyrinths, and gangs! Gunurash III, the Krona homeworld, is near and dear to my heart, as it was the first area I worked on and I love its giant bug monsters and rocky, arid harshness. This is a really hard question, Matt. 😛

Matt: What kinds of things do you like doing when you’re not working on Starmourn? Do any of them influence your building work?

Matt: What do you think players are going to like best about the areas in Starmourn?

Matt: Thanks Laura! And thanks for reading, folks. I hope you feel a tiny bit more connected to our hard-working team than you did before! In a couple weeks, I’ll do an interview with Justin, our producer, as well.