The economy design in Starmourn is still at a relatively nascent stage, but there are some key ways it’s going to differ from our other MUDs, based on lessons learned over the last 20 years of running MUDs.

The ability of players to generate in-game currency (Marks in Starmourn’s case, gold in the fantasy games) needs to be narrower between high level and low level and, at least as importantly, between people who play (or let a script run) for 12 hours a day vs those who play 3 hours a day, than in our other games. I’m not talking here of player to player gold transfers – that doesn’t create anything. I’m talking primarily here about bashing/killing NPCs, as that’s the primary way that gold gets created in our other games.

The trouble with having a gap in earning/gold-creation potential that’s too big is that it ultimately means that anything that’s in-demand and priced by players (vs NPC shops) ends up being either trivial for some players or out-of-reach for others. However, it’s also important that the gap not be too small, or it robs us of an incentive to give players to get better, and do more. Equality is not the goal, but raging inequality isn’t the goal either. There’s a happy medium there. Of course, narrowing the ‘earning gap’ doesn’t solve the above problem, only ameliorate it somewhat, as there’s no stopping successful long-time players from accumulating a lot of wealth over time, barring some kind of taxation system where you get taxed on your Marks sitting in your account, but nobody’s going to like that.

“Isn’t some people being poor and some being rich just like real life?” you might ask. Why yes, it is! But the key difference is that this is a game, and were real life a game, I’m fairly sure that most people wouldn’t willingly select the ‘I live in poverty on less than $2/day with no real hope for life to get better’ option. In a game, everybody wants to be the hero, the leader, the standout. Nobody wants to be just another of the huddled, struggling masses.

One way we’re going to narrow this gap is that hunting NPCs/monsters won’t be all that rewarding in terms of Marks. Instead, there will be other reasons to hunt/bash, though I’m not going to go into that now.

As a replacement, we’re going to rely on a system of ‘bounties’. We don’t have a final design for that yet, but essentially it’s completing a usually procedurally-generated task for a reward. For example, a bounty could be as simple as, “Kill Jot Tama, the Bushraki merchant on the other side of town” wherein all you need to do is walk across town and kill Jot Tama. 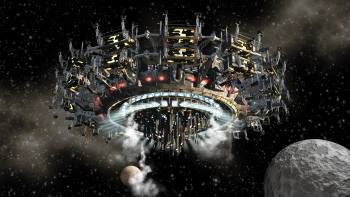 But a bounty could also be much more complex. For instance, “Acquire the information cache from the Iron Corsairs’ Gamma Station”. In this (purely hypothetical) case, you’d need to get in your starship, navigate to Iron Corsair space, fight or sneak your way (in your starship) to Gamma Station, dock, exit your starship, fight off whatever security has just watched you dock illegally, make your way to a terminal with access to Gamma Station’s offline infostorage, and then successfully hack it, which is a whole process in and of itself. You’d likely need a friend or two with you as well, since while hacking your body is just sitting there, totally vulnerable to attack, and a hack of this magnitude will take a few minutes.

Bounties will have outsized rewards compared to quests that are available to do whenever you choose, and we’ll place limits on the number (or a combination of number + difficulty or something) you can take per day. By finding the right balance there, we can basically ensure that there’s only so many Marks you can generate each day that way, and that it it will ‘only’ take a few hours to max out your Mark earning potential via bounties. We’re hoping that via this method, we can keep a handle on the value of Marks, and keep as much of a lid as we can on what’s called “Mudflation.”

Of course, there will certainly be other ways to earn Marks too, but most of them won’t create new Marks, just pass them between players when players sell things to each other.

For those of you unfamiliar with our other games, most things that players can make require a selection of ‘commodities’ (“comms” for short).  Those comms, in Achaea for example, are gotten two ways: Many of them come from the player mining system exclusively, while a few are bought from NPC shops. In Starmourn, we’re also going to have a commodity system, but it will work a bit differently. 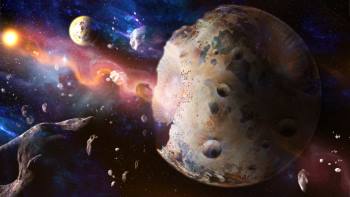 I think that these three fundamental differences in our economic systems in Starmourn are going to end up creating a very different-feeling and interesting environment, particularly in the case of comm storage and transportation fees. For instance, take mining asteroids – it won’t be a case of simply identifying where particular minerals are/have been generated. You’ll have to factor in storage costs and where the order was placed (which planet), as well as any manufacturing facilities you’ll need to use to fulfill the order.

I even imagine some people specializing in transport, offering to quickly and efficiently transport goods for other players, because their starship is set up for cargo vs mining or combat or whatever other role a ship may have. We’ll work to ensure that NPC transport costs are more expensive than it is likely to be for players, to allow for that possibility too.

Similarly, I can see people specializing in running manufacturing facilities of a particular type. It won’t simply be a matter of instantly turning X into Y. Each autofactory will have be able to produce a particular range of goods (like computing parts, or weapons), and will have a particular capacity/hour. Each type of thing produced will cost the autofactory owner something (a cost she will presumably pass along to the customer), and just keeping the autofactory open will require regular maintenance costs.

Overall, the idea is to create systems where there are meaningful decisions to be made, so that there is actual skill involved in mastering the economic systems in Starmourn.